In Letter to Ernst, Doctors Warn That Ernst’s Vote in Confirmation Could “Directly Lead to the Large-Scale Elimination of Health Coverage”

In a new letter, 20 Iowa doctors and health care professionals wrote to Senator Joni Ernst demanding that she “stand by Iowa patients, medical professionals, and our health care institutions and vote against Judge [Amy Coney] Barrett’s confirmation” – warning that Ernst’s vote could directly lead to the repeal of the ACA and undoing of coverage protections for pre-existing conditions.

According to the Quad-City Times, the letter “cites concerns that Barrett’s previous comments and judicial writings suggest she could cast a decisive vote” in favor of the Ernst-backed GOP lawsuit to repeal the ACA. The lawsuit, which will be heard by the Supreme Court on Nov. 10, was only made possible by a provision in Ernst’s 2017 corporate tax break legislation.

Despite her desperate election-year attempts to rewrite her record, Ernst has spent six years in Washington supporting efforts to gut coverage protections for pre-existing conditions and dismantle Iowa’s Medicaid expansion. According to NBC News, Ernst has lost support from Iowans “because of her vote to repeal the Affordable Care Act.”

Read the full letter to Sen. Ernst from 20 Iowa doctors and health care professionals below. 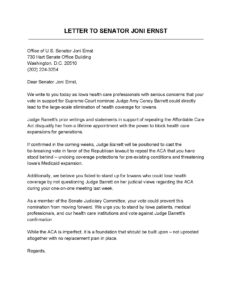 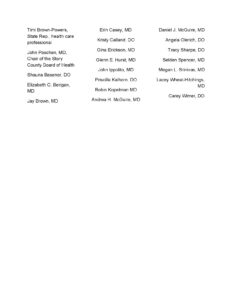