WATCH: Ernst Fumbles When Pressed On Her Campaign’s Illegal Coordination With Her Dark Money Group

After Months of Dodging Questions, Ernst Struggled to Explain Why She and Her Top Aides Broke Federal Law to Save Her Re-Election

This weekend, the third-most unpopular senator in the country Senator Joni Ernst sat in the hot seat facing the public for one of the first times in months – and it was clear she was not willing to be held accountable. When pressed by a constituent on how her campaign and her dark money group, “Iowa Values,” broke election law through illegal coordination, Ernst exhibited the verbal gymnastics of a politician caught red-handed. 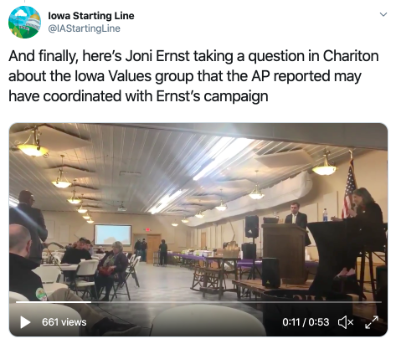 Constituent: “What can you tell us about “Iowa Values?” And is this a 501c, and if so, what other activities do they engage in besides in your re-election campaign? And why is the FEC and IRS investigating the ties to dark money in your campaign?”

Senator Ernst is facing four complaints by election watchdogs after her campaign was caught illegally coordinating with “Iowa Values,” a dark money group set up and run by top aides with the sole intent to boost Ernst’s re-election – claims that Ernst’s campaign pathetically dismissed as “fake news.” Despite her campaign promises to end Washington corruption, Ernst has refused to hold herself accountable to her own standards – abusing our broken campaign finance system to save her political career.

“Pretending the rules don’t apply to her, Senator Ernst is proving herself to be the unabashed Washington politician that she promised to ‘make squeal,’” said Jeremy Busch, Iowa Democratic Party spokesperson. “No amount of verbal gymnastics can hide the truth from Iowans: Senator Ernst has proven she’s willing to break campaign finance law and pull dark money strings in order to win re-election. Iowans are ready for change.”