Last night, as Iowans turned their attention to the growing coronavirus crisis that has begun to spread into the United States, Senator Joni Ernst had her attention far elsewhere. In the midst of the administration’s coronavirus press conference to discuss the nation’s plan of action, Ernst was busy hosting a swanky cigar reception to raise thousands for her campaign and re-election super PAC. 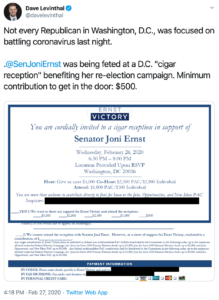 This isn’t the first time Senator Ernst has been exposed by one of her DC donor events, but this occasion marks a stark example of putting her big donors first – and another display of the hypocrisy that’s defined her time in Washington.

Ernst had previously falsely accused the Obama Administration of “failed leadership” on the Ebola crisis – yet when it came time to match her words with action, Ernst was silent as the CDC was forced to cut its global disease prevention efforts by 80% in 2018. Now, as Senate Democrats have requested $8.5 billion to help combat coronavirus, over triple the amount the White House said it’s willing to put forward, Ernst has again refused to call on her party leaders to provide the resources necessary to fight the crisis.