No Plan for Health Care, Defending Her Vote for a Fossil Fuel Lobbyist to Run the EPA, Partisan Hypocrisy, “Discussion” – Not Action

Endangered incumbent Senator Joni Ernst has faced widespread scrutiny for disastrous TV interviews across her six years in Washington, but her partisan hypocrisy and nonanswers on this week’s Iowa Press made it one of her worst to date.

1. Failure to Protect Health Care Amid a Deadly Pandemic

Senator Ernst all but admitted that the GOP has no plan for health care if their reckless lawsuit to repeal the entire Affordable Care Act is successful – an effort that could kick an estimated 227,000 Iowans off of coverage during a global health crisis.

When pushed for details, Ernst spun a word salad of platitudes before finally claiming the Senate would “revisit” one of the GOP’s years-old bills that failed to even receive support from the Republican majority in a GOP-controlled Congress.

2. Standing By Her Vote to Let a Fossil Fuel Lobbyist Run the EPA

Pushed by Radio Iowa’s Kay Henderson on why she gives fossil fuel lobbyist-turned EPA head Andrew Wheeler the “benefit of the doubt” on his abuse of RFS waivers, Senator Ernst AGAIN rushed to defend Wheeler – who she voted to confirm – and refused to call for his immediate resignation.

After weeks of being raked over the coals by Iowa farmers, Ernst was forced to state that she’s “not defending the oil industry” – even though her voting record and $420,000 in campaign contributions from Big Oil tell a far different story.

3. Blatant Hypocrisy on the Courts

Laying bare her partisan priorities in Washington, Senator Ernst said that even if she loses the election in November, she would disregard the will of voters and play political games with the Supreme Court to push Mitch McConnell’s agenda.

As widely reported, Ernst’s shameless display of Washington politics is in “direct opposition to the stance she took in 2016” and runs counter to her signature promise to “make ’em squeal” in Washington: 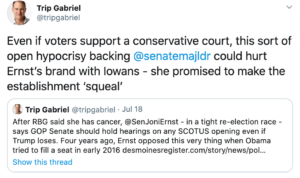 4. Doubling Down on Failed COVID-19 Response

After an embarrassing display of partisanship earlier this month on CNN’s State of the Union, Senator Ernst attempted a TV take-two on her shameless defense of the federal government’s failure to protect Iowans from the COVID-19 health crisis.

Ernst praised what she claimed was “quick reactionary” leadership – even though she and fellow Republicans spent the early months of the COVID-19 crisis downplaying and politicizing the threat, and even shipped nearly 18 tons of vital health equipment to China despite warnings that the supplies would be crucial to keeping Americans healthy.

Time and again throughout Senator Ernst’s disastrous interview, she refused to commit to taking action for Iowans – repeatedly saying that critical measures, including pandemic relief, should simply be part of the “discussion.” Yet, every time she was asked about a partisan objective of Mitch McConnell, Senator Ernst left no doubt that she would relentlessly support his agenda.

Today, the Iowa Democratic Party released a new digital video, “Discussions,” reminding voters that Senator Ernst works for Mitch McConnell and her corporate special interest backers, not the Iowans she promised to fight for. 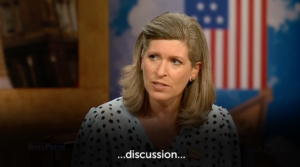