In a blistering letter to Senator Joni Ernst obtained by the Carroll Times Herald, 17 Iowa farmers and biofuels leaders demanded that Ernst follow the lead of Democratic nominee Theresa Greenfield and immediately call for the resignation of EPA head Andrew Wheeler – the former fossil fuel lobbyist Ernst voted to lead the agency.

The letter – signed by 9 board members of the Iowa Farmers Union, former Lieutenant Governor Patty Judge, and farmers across Iowa – scolded Senator Ernst’s failure to protect Iowa’s farm economy, saying “the time for promises and talk is over.” However, it noted that even if Ernst follows through on their demand, it “cannot reverse the damage caused by the vote to confirm Andrew Wheeler in the first place.”

The forceful rebuke came on the same day that Iowa Starting Line published a damning report on how Senator Ernst took thousands in campaign contributions from a Big Oil CEO and his corporation’s PAC, while it abused RFS waivers worth at least $100 million.

Senator Ernst is facing heat for refusing to demand Wheeler’s immediate resignation, after reports that he is considering 52 retroactive waivers from the oil industry. Instead, Ernst has redoubled her defense of voting for Wheeler – saying he was “qualified” despite his work as a fossil fuel lobbyist, and his “explicit promises” to abuse RFS waivers. Even Iowa Governor Kim Reynolds was critical of Wheeler yesterday. 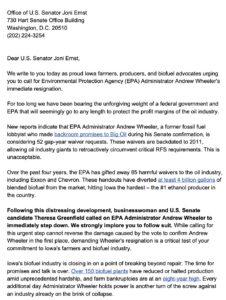 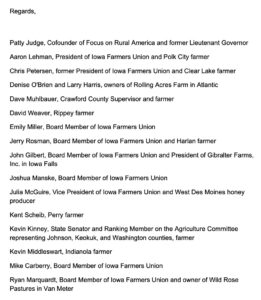